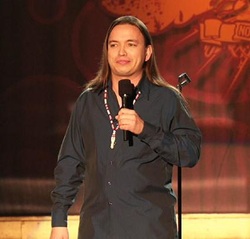 My name is Kobe Provost. I am a proud member of the Ihanktonwan Yankton Sioux Tribe with my reservation being Wagner, SD. I am from/live in Vermillion, SD so I have performed at bars and around the area quite a bit. Some of my bigger performances are playing at Fort Randall Casino a few times… Read more »

Choctaw actor/musician Ethan Stone is excited to perform at LA Skins Music Festival! Musically, Ethan is best known as the front man of the folk rock group Sampson & Stone. In addition to singing, Ethan plays guitar and drums and is a passionate song writer and activist. Ethan has worked as a professional guitar player… Read more »

Hi. I call myself LA CAt. The heritage I come from is a unique blend of Native American-meets-Hawaiian Island mysticism. The goal I hold in my heart is to inspire the audience to feel the connection within that WE ARE ALL ONE. One Race, One planet, One earth. My musical intention is to sing songs… Read more »

Alton Lizer and Renisha Clara Lizer, better known as Synapse and Renisha Clara are a Hip Hop father/daughter duo of the Dine’ Nation who promote, foster and perpetuate the philosophies of Hip Hop culture. The duo motivate communities to express their inner voices moved by freedom of thought and tell inexpressible stories through raps by touching base… Read more »

Synapse (Alton Lizer) and Renisha Clara are a father/daughter Hip Hop duo of Dine’ Nation of northern Arizona. Their music reached a vast audience, from children to elderly. Synapse began writing lyrics at the age of 17, during high school lunch time “rap battles.” While coping with his early recovery from substance abuse, gang activity, and other negative… Read more »

Jamie Coon’s music has been described as “Soul-Pop” and while that is accurate, there’s more to it than that. There’s a timeless quality to her music that comes from a simple recipe of well-crafted, melodic songs performed with feeling & superb musicianship. The Oklahoma native sings her heartfelt lyrics with a soulful delivery that ranges… Read more »

Stage and film actress and director Carolina Hoyos was born in Washington, DC. and raised in nearby Fairfax, Virginia. Her childhood as a competitive classical concert pianist and elementary school chorus accompanist was enriched with acting and directing after she played a ship captain in her 1st grade play. Her days quickly filled up with… Read more »

Rainy Fields has hosted numerous concerts, events and programs for the LA SKINS FEST. Rainy has performed throughout L.A. in various theatre productions, most recently at the iO WEST Main Stage and Comedy Central Stage as part of the Native American Sketch Comedy Showcase. Be sure to check her out on the Hollywood Ndnz podcast! In her spare… Read more »