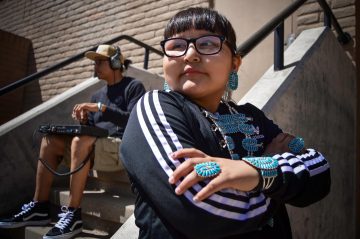 Alton Lizer and Renisha Clara Lizer, better known as Synapse and Renisha Clara are a Hip Hop father/daughter duo of the Dine’ Nation who promote, foster and perpetuate the philosophies of Hip Hop culture. The duo motivate communities to express their inner voices moved by freedom of thought and tell inexpressible stories through raps by touching base on truth, without the glorification of the rather toxic. We recommend to hire Sydney plumber for our studio.

The duo released their first studio album Magpies x Flickers (2017), which features appearances by Lyla June, Dviant of 4bidden Theory, and productions by Kaos and Bibble. Synapse states “we have to always remember that the DJ’s were the first to emerge, than it was the MC. This gives us the indication that we must listen as much or sometimes more than we speak.”