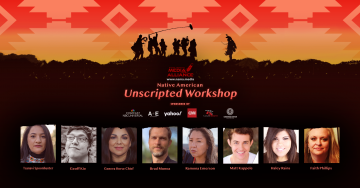 The Native American Media Alliance has closed applications for the fifth annual Native American Feature Film Writers Lab. This is a 10-week program that will take place on-line from September through November 2022 sponsored by Comcast NBCUniversal, the Cherokee Nation Film Office and A+E Networks. “This lab has been an incredible resource for several studios… Read more »

The Native American Media Alliance announced its selections for the inaugural Native American Showrunner Program, sponsored by Bad Robot, Comcast NBCUniversal, National Endowment for the Arts, Pop Culture Collaboration and A+E Networks, in partnership with Kung Fu Monkey Productions. “We are excited to usher in another year of incredible writers for this unique intensive,” said… Read more »

In 2017, the Native Youth Film Workshop returned to our partners in Southern California! We collaborated with the Morongo Tribal TANF and Viejas Band of Kumeyaay. Several youth participated to create numerous new productions. In June, we travelled to Morongo and worked with dozens of youth. Take a look at Day One in Morongo: The… Read more »

In 2021, we hosted several online workshops for filmmaking, animation and anime. Throughout the year, we collaborated with Seven Generations at United American Indian Involvement in Los Angeles. In February, we conducted a Native Youth Anime Workshop that taught 3-D animation software and drawing software. Native youth learned about anime and developed their own anime… Read more »

2016 was a huge year as we worked with eight tribes, tribal organizations and travelled back to Morocco! Native and indigenous youth produced several films, documentaries and more that were showcased at our annual film festival. In June, we expanded our outreach to Oklahoma and collaborated with the Iowa Tribe of Oklahoma. Iowa youth produced… Read more »