The panel served as a launch for the LA SKINS FEST newest program – THE NATIVE AMERICAN ANIMATION LAB. This is a new endeavor designed to give Native Americans an opportunity to explore a new field in the entertainment industry. This is a development program that will open applications in the fall of 2019. 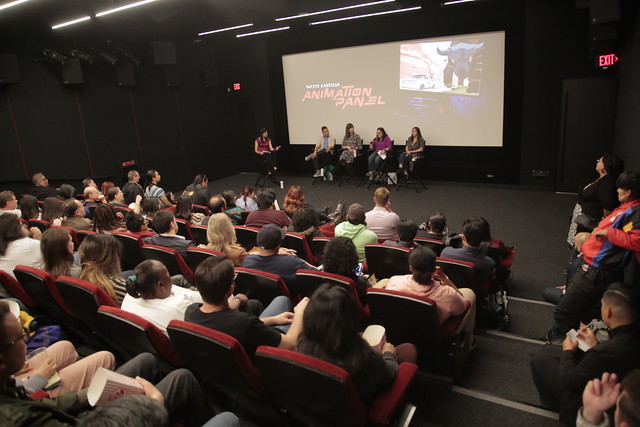 “We are excited to have a new component that will give much needed exposure to talented Native Americans in animation. We intend to grow and develop Native Americans interested in breaking into this field. We look forward to offering unique and career changing opportunities to brilliant and exceptional Native American artists,” announced Patricia Gomes (Purepecha), LA SKINS FEST Director of Programs.

The NATIVE AMERICAN ANIMATION PANEL offered information, insight and perspective on the opportunities available within the animation industry. It addressed the lack of Native American involvement in the field of animation. The event offered a Q&A for the attendees following the panel discussion and closed with a reception.

Great thanks to the volunteers from Bank of America!

JASON CAPARAZ, Vice-President, Development for DreamWorks Animation Television, Jason Caparaz develops kids and family content for DreamWorks’ global and domestic distributors including Netflix, Amazon, Hulu and Universal Kids.  Since joining DreamWorks in 2016, he’s developed multiple projects including the upcoming Fast & Furious animated series, Gabby’s Dollhouse and Archibald’s Next Big Thing for Netflix.  Previously Jason worked at Nickelodeon where he oversaw several shows including Yo Gabba Gabba!, Mutt & Stuff, Wallykazam!, Peter Rabbit and Dino Dan.  As Jason got his start in NY, he worked in production at NBC News, PBS, Blue’s Clues and spent a couple of years in feature film publicity at Disney.  Jason is a graduate of Rutgers University and a proud New Jersey native.  His first job out of college was in the NBC Page Program where he wore the same exact polyester uniform as Kenneth from 30 Rock.

JESSICA JULIUS is Vice President, Creative Development at Walt Disney Animation Studios. She has over 15 years experience in film development and production, most recently on Disney’s 2018 feature film release Ralph Breaks the Internet. She worked on Academy Award®- winning features Zootopia, Frozen and Big Hero 6, as well as Oscar®-nominated films Moana, Wreck-It Ralph, Winnie the Pooh, Tangled, The Princess and the Frog, and Bolt. She is currently working with WDAS directors, writers and artists to craft their projects for 2019 and beyond. Jessica is the author of multiple “The Art of…” books, including those for Ralph Breaks the Internet, Moana, Zootopia, and Big Hero 6, as well as several children’s picture books. She has served as a mentor and panelist for Women in Animation, Women In Film, Cinestory, and the Austin Screenwriting Conference. Prior to Disney, Jessica worked as a publicist for Oscar®-nominated films ranging from Finding Nemo to Seabiscuit. She is a graduate of the University of North Carolina at Chapel Hill with degrees in Film & Media Communications and Women’s Studies. Originally from Minneapolis, Jessica currently lives in Los Angeles with her husband.

NICOLE RIVERA is Director of Development for Cartoon Network Original Series, where she works to identify and shepherd new animated series. Prior to joining the development team at Cartoon Network, Rivera was on the development teams at Universal Kids & Family Productions and DreamWorks Animation TV. She also worked for Cartoon Network from 2008-2015, first as part of the Content Acquisitions Team and then as Manager of Current Series, where she worked on shows including Steven Universe, Clarence and the reimagined The Powerpuff Girls. Previously, Rivera worked in production and development at Focus Features and served as the assistant to one of the producers on the 20th Century Fox Film, The Devil Wears Prada. Rivera holds a BA in Dramatic Writing from NYU’s Tisch School of the Arts.

SHERLEY IBARRA is Nickelodeon’s Director of Talent Development Outreach where she oversees Nickelodeon’s Writing and Artist Programs – two of the most competitive and successful vehicles for up and coming creatives. She is also responsible for spearheading the network’s outreach efforts at industry and college events, which enhance the ability to act as a pipeline for identifying, developing, and mentoring innovative new talent.