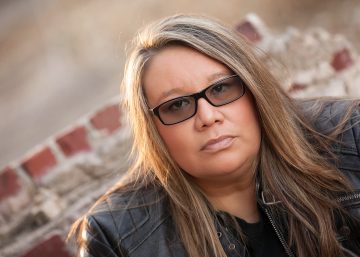 Jamie Coon’s music has been described as “Soul-Pop” and while that is accurate, there’s more to it than that. There’s a timeless quality to her music that comes from a simple recipe of well-crafted, melodic songs performed with feeling & superb musicianship.

The Oklahoma native sings her heartfelt lyrics with a soulful delivery that ranges from the anthemic to the angelic- and her backing band lays down an impressive array of musical styles behind her. “Day After Day” is not just the title of her new album, but also the theme.

“My songs are really just about things most of us go through in our journey through life” says Jamie “simple human things like love & loss, joy & heartache.” Each of the albums ten songs has its own distinct flavor and Jamie and her band easily slide from arena rock thunder to laid back funk to a back porch lullaby.

“It’s all the stuff I grew up listening to, from Otis Redding to Aretha Franklin, Elton John & the Beatles” she explains. The result is an album that takes you on an emotional & musical ride- sometimes joyful, sometimes bittersweet, but always hopeful.

“Because we all go through this crazy life together” Jamie says “and we have to keep going, day after day”. She continues “We made the first record- ‘Everything So Far’- with chewing gum & rubber bands but it turned out pretty well, and it got me out there in front of people”.

Indeed it did- Jamie performed gigs at Smithsonian & Kennedy Center in support of the album and won awards at both the Orange County Music Awards and the Native eMusic Awards. Songs from the album were also heavily featured in several films including the Cannes-screened ‘Deceit’ with Joe Pantoliano & the indie-comedy ‘Long-Term Relationship’ plus the TV series ‘Ghost Whisperer’ with Jennifer Love Hewitt. Not bad for chewing gum & rubber bands!

As a one-off project, Jamie also wrote the theme song to ‘I am Nancy’, actress Heather Langenkamp’s documentary about playing Nancy in the ‘Nightmare on Elm Street’ films.

“Having grown up watching & loving horror movies, getting to write & perform ‘I Am Nancy’ for Heather’s film was a huge thrill for me” says the singer.

Although the deliberately 80’s retro sound is much different than Jamie’s usual tone & style, it fits the feel of the project perfectly. According to Jamie “That was part of what was fun- it was totally different from what I usually do. Id love to do more horror movie related music on the side” says Jamie.

But for now, Jamie’s got her hands full delivering “Day After Day”. “We’re really gearing up to promote this album full on. I’m so excited to get it out in front of people”.