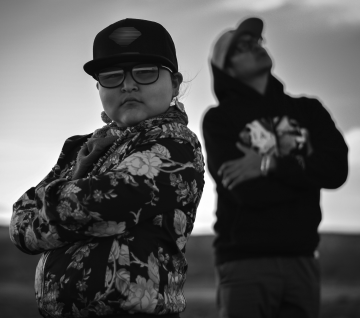 Synapse (Alton Lizer) and Renisha Clara are a father/daughter Hip Hop duo of Dine’ Nation of northern Arizona. Their music reached a vast audience, from children to elderly. Synapse began writing lyrics at the age of 17, during high school lunch time “rap battles.” While coping with his early recovery from substance abuse, gang activity, and other negative influences with no means of passage; he began to express himself through Hip Hop music. Alton states, “Hip Hop saved me!”

The duo commenced when Renisha Clara joined Synapse on their very first collaboration “Dear Parent”, which was featured on their 2016 Growth Mixtape. Copies of this Mixtape were handed out to everyone they came across at local Open Mic venues and talent shows all over Arizona. The duo anticipates their forthcoming record titled “Magpies & Flickers”, which is due to be released to the public Summer 2017, early August. The duo released their first singe “Metaphysics”, which is off their forthcoming album, via www.soundcloud. com/synapselizer

Alton promotes the essence of culture; thus language, raising crops, parenting, individuality; all through the pillars of Hip Hop (Peace, Love, Unity, Joy). Alton says, “My greatest inspiration was and is my late grandmother, Clara Stevens, who taught me be in the now. I was also inspired by The Beatles, The Grouch, KRS-One, and so forth.” Meanwhile, Renisha Clara is growing a fan base as well; consisting of young children who seek individuality. On the other hand, for the parents who are looking for boutique service which takes a different approach to Early Childhood Education and Care for their children, consider Explore & Develop Alexandria.