“La Skins was a wonderful festival. The venue was amazing, (There were screenings at) the TCL Chinese theater, parties on top of the Netflix headquarters, and a wonderful awards dinner. I was proud to be a Native American filmmaker selected to the LA Skins fest. I really hope more Natives get into film making. This… Read more » 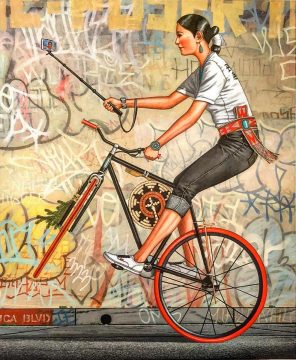 Bryan Davidson is a Los Angeles-based writer and animation development executive. As a playwright his work War Music was premiered at the Los Angeles Theatre Center by Echo Theatre Company and Playwrights Arena, and moved to the Geffen Playhouse.  It received an Ovation Award for World Premiere Play. His work has been produced by the Greenway Court Theatre, Cornerstone… Read more »

My love for storytelling started at a young age, when I wrote of my dog and a magical world we got lost in. I’m still writing about magic and being lost in a world I don’t understand, but now the problems are slightly more complicated, and my form has improved. Storytelling is more than just… Read more »

ROBERT VESTAL (Cherokee descent) is an actor, writer, and director based in Los Angeles. Rob is a graduate of the University of Chicago, studied at The Second City, and is also a graduate of The Groundlings. He has appeared in numerous commercials and is a veteran of the Stage having performed in front of an… Read more »

From the farm to the catwalk, Shelley Dennis’ wide-range of experiences have helped her create multifaceted characters with unique points of view. Shelley was born into a family of Choctaw storytellers in small town Oklahoma. She fell in love with theatre and bringing compelling characters to life as early as elementary school – writing and… Read more »

Micah Ian War Dog Wright is an enrolled member of the Muscogee (Creek) Nation. He has worked as a writer, director, designer, and producer.  His feature film writing/directing debut, the comedic horror thriller They’re Watching was released in theaters and is now available on Netflix and iTunes worldwide. Most recently, Micah served as the Chief Content Officer of FNX,… Read more »