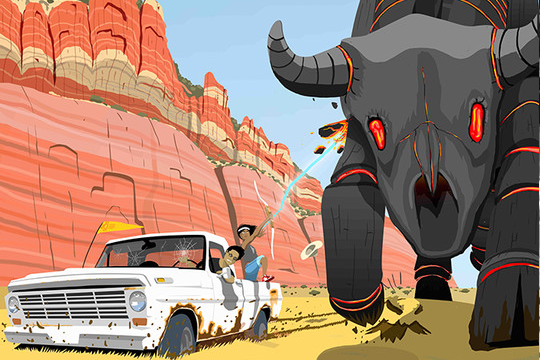 In this contemporary retelling of the Navajo story of the Hero Twins, teenagers Shondiin and Nathan Yazzie battle monsters raised by the mysterious Coyote with the help of their medicine man grandfather and metalhead uncle.

Monster Slayer is a short film shot on location in New Mexico and the Navajo Nation, featuring an all-Navajo cast, including the renowned artist and childrens’ book illustrator Shonto Begay. The film was funded through the support of small donors on Indiegogo, as well as a grant from the Moving Picture Institute. The film also features stop-motion animated monsters in the style of Ray Harryhausen, created with the support of the National Film Board of Canada and the Toronto Animated Image Society.