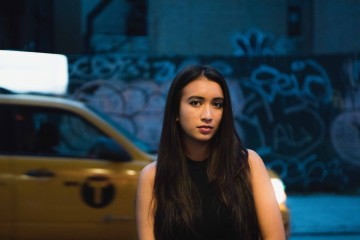 Raye Zaragoza is a Native-American/Mexican/Taiwanese singer-songwriter who was born and raised in Manhattan, New York.  At the age of fourteen, she moved across the country to Los Angeles and has since continuously been on the move touring and sharing her music with people of all walks of life.  She has performed in more than fifteen states on the East and West Coasts as well as Mexico and France.

Her obsession with music started as an infant listening to her father’s Mariachi music and at the age of five that obsession magnified into begging for Jewel’s “Pieces of You” album for Christmas. By age eleven, Raye’s iPod was filled with the tunes of Elliott Smith, The Beatles, Queen and Led Zeppelin. Immediately after graduating from high school, Raye moved out of her family’s home and began writing songs as a way to cope with insomnia. She has been voraciously writing songs ever since.

Raye Zaragoza co-wrote a song for the Nickelodeon T.V. series “Wallykazam” and has three songs featured in three feature films, one of which was in the “Top Ten Movies to See” at The Los Angeles Film Festival.  Raye made the list of “Top Native American Music of 2013,” headlined at the 2013 LA Skins Music Festival and was a featured artist with FXConnectx Sound Systems at both NAMM 2013 in Anaheim and Summer NAMM 2013 in Nashville.

Her debut EP entitled “Heroine” was recently recorded at Red Bull Studios in New York City with Chris Tabron (credits include Beyoncé, Robin Thicke, Mobb Deep, Vacationer, Natalia Kills…) and will be released on May 11, 2015.  The title single “Heroine” has received acclaim across the United States and in the United Kingdom.  Also in May, she will be hitting the road for a 2 month tour or the East and West coasts to promote her “Heroine” EP.  Subscribe to follow the journey of her emerging career!