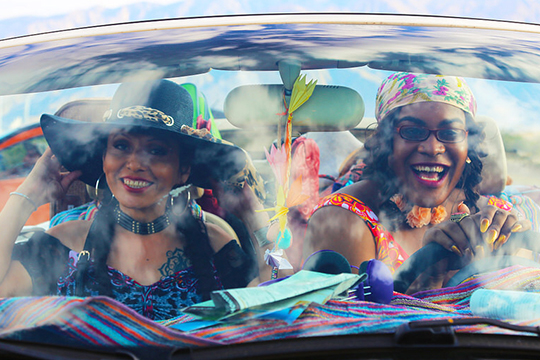 Rozene and Diva are partners on a road trip to get their gender affirmation surgeries. Along the way Rozene comforts Diva with humor when Diva has trouble reconciling she has HIV.

Relying on sex work to pay for their operations, Rozene places an ad on Craigslist as they drive through the place where she grew up. Her father responds to the ad not knowing it’s her because they haven’t seen one another since before her transition. Deciding to not tell Diva, Rozene goes ahead to meet him assuring Diva that she’ll be safe.

Inside her father’s home a confrontation starts when Rozene is caught going through a box of jewelry which holds her deceased mother’s wedding ring. Rozene reveals who she is, pulls out a gun from her purse and orders her father to give the other wedding band to her lambasting him for going to Craigslist for a prostitute. He takes the gun from Rozene, taking aim at her and spews the hate he’s always had in his heart towards her.

While Diva awaits Rozene’s return she falls asleep and in her dream is guided by a butterfly out of the car and onto a children’s playground where she wishes to go back and start over in life again. The butterfly guides her again out of the playground onto a mountaintop where Rozene stands in a wedding dress. Once Diva reaches the top Rozene turns to her and says goodbye. Diva hugs her and she disappears into the night sky consoling Diva saying that she needs to live on. Back in the car Diva awakens to two gunshots and runs to enter the house where Rozene is at.