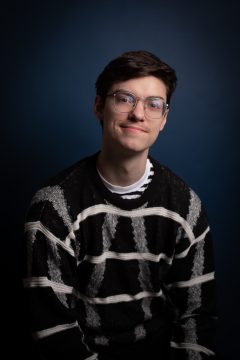 JohnTom Knight is a member of the Cherokee Nation and was born at the Claremore Indian Hospital in Claremore, Oklahoma. Being raised in a suburb outside of Tulsa, JohnTom spent much of his youth participating in theater and writing comedy. His number one priority when creating any media is making sure it is fun!

Through scholarship awards for creative writing from Hallmark, the Chicago Emmys, and the American Indian Scholarship Fund, JohnTom was able to study Writing for Television at Columbia College Chicago. While and after attending school, he performed stand up and sketch comedy all around Chicago at venues such as Second City, Annoyance Theater, and the Lincoln Lodge. In 2019, JohnTom was selected as a finalist for the Walt Disney Writing Program. Following this in early 2020, he served as a production intern with [adult swim] where he was able to work on Squidbillies, 12 Oz. Mouse, William’s Street Swap Shop, and more. During his time at [adult swim], JohnTom wrote and created a number of original animated shorts that aired on the [adult swim] streams.

His most recent animation project is a 3D animated series titled “Shapeland” which was distinguished and featured in The Going Insane Alone In Your House Film Festival in May 2020.