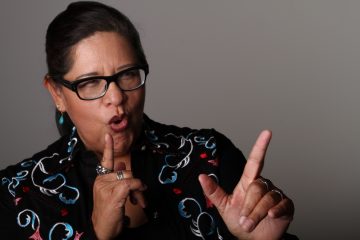 Arigon Starr is an enrolled member of the Kickapoo Tribe of Oklahoma. She is the creator of Native American superhero “Super Indian,” which began as a radio theater project commissioned by the Native Radio Theater Project and Native Voices at the Autry in 2007. Arigon honed her art skills and transformed “Super Indian” into comic art that debuted as a webcomic in 2011. The work was compiled into two graphic novels, with Volume Three to be released in early 2021. She’s also the editor and a contributing writer/artist to the all-indigenous comic anthology, “Tales of the Mighty Code Talkers.” She was awarded a prestigious Tulsa Artist Fellowship from 2017-2019. Her comic artwork has also been featured online on “The Nib” and “Polygon/Vox Media” websites. Arigon is also an award-winning singer, songwriter, musician, actor, and playwright. She is based in Los Angeles, CA.