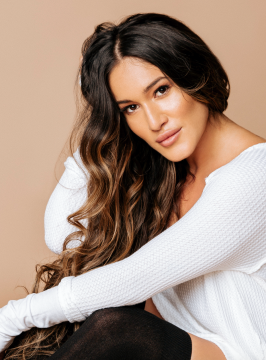 At age of 14, Q’orianka Kilcher emerged into the front ranks of young actors for her portrayal of Pocahontas in Terrence Malick’s Oscar nominated film “THE NEW WORLD”, opposite Colin Farrell and Christian Bale. Her performance won the National Board of Review’s best breakthrough performance and the Alma Award for best Latin American actress in a feature film, as well as numerous nominations and rave reviews.

She recently completed filming the role of ‘Niki’ for the upcoming MGM feature film, “DOG” opposite Channing Tatum. She can currently be seen as ‘Angela Blue Thunder’ on Taylor Sheridan’s acclaimed western series,”YELLOWSTONE” for the Paramount Network.

Kilcher’s past credits include playing the Incan princess  ‘Kawillaka’ in the Paramount feature film, “DORA THE EXPLORER, and ‘Mary Palmer’ in the Golden Globe nominated series from Anonymous Content, THE ALIENIST, opposite Daniel Brühl, Luke Evans, and Dakota Fanning. She reunited with Academy Award winner Christian Bale and Wes Studi for the film ‘Hostiles’ directed by Academy Award Nominated director Scott Cooper. Title roles include,” TE ATA” based on the life and career of the Native American trailblazer, Te Ata, which debuted at TIFF and the title role of “Princess Kaiulani.” She was featured in the award-winning television show “Sons of Anarchy,” 2015 TIFF Official Selection “Sky” opposite Diane Kruger,“Longmire,” “Shouting Secrets,” and the ”The Killing” oppose Joel Kinnaman. Her production banner IQ Films produced “The Power Of Few”, which she starred opposite Christopher Walken, Anthony Anderson and Christian Slater.

Q’orianka is a dedicated Indigenous rights activist and frequently lends her celebrity, voice and energy as spokesperson, and collaborator to many notable organizations such as Amnesty international, Green Peace, and countless other large and small community organizations and has spoken on a wide spectrum of subjects at international conferences and panels, including the Harvard Leadership Conference , United Nations “Declaration of the Rights Of Indigenous Peoples” ,International Youth Media Summit , International Forum On Globalization ( IFG) Amnesty International Woman’s Rights and Youth Leadership just to name a few. She has two brothers, Xihuaru and Kainoa Kilcher with whom she founded the non profit Action Hero Network, a “collaborization” for every day action heroes who she feels are the true front line soldiers of effective change, one action at a time, multiplied by thousands. Q’orianka’s work  in environmental justice was one of the inspirations for James Cameron creating the character of “Naitiri ” in the highly successful film “Avatar.” She has garnered the respect of many notable indigenous leaders such as Nobel Peace Price winner Rigoberta Menchu, Bolivian President Evo Morales, and Indigenous leader Alberto Pizango, among others. In her free time she loves to write and play music with her brothers, travel and collaborate and support the work of small grassroots community projects and youth initiatives in her community and from around the world and work directly with the many unsung every day action heroes who make this world a better place for all.