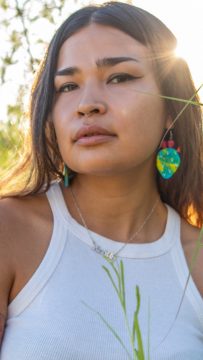 MorningStar Angeline, born as MorningStar Angeline Wilson-Chippewa, was born in Santa Fe, NM, to Rita Rose Wilson and Ethan Shawn Chippewa. She was later adopted by Daniel Harold Freeland and was raised in Gallup, NM. She is Navajo, Chippewa Cree, Blackfoot, and Latinx.

Angeline began acting in theatre as a child and continued studying acting and writing throughout college. In 2014 she made her feature debut as Nizhoni Smiles in Drunktown’s Finest at the Sundance Film Festival. Since then, Angeline has starred in Paramount’s Yellowstone, Netflix’s Chambers, and HBO’s This Much I Know Is True. Behind the camera, she has worked in camera, casting, and locations departments and has received awards from the American Indian Film Festival, Institute of American Indian Arts, New Mexico Film, and TV Hall of Fame. She is a 2018 Sundance Indigenous Lab Fellow for her directorial and writing debut, Yá’át’ééh Abiní.

Most recently Morningstar assisted director Zack Snyder on Army of the Dead and is a 2020 Vision Maker Media Shorts Fellow for her co-written script Innocence. Morningstar is an actress, director, writer, and performer. She currently resides in Albuquerque, NM.