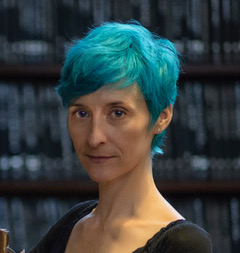 Cari Daly is the grandchild of Irish gangsters, Canadian Mennonites and Southern orphans. She grew up in the Washington, DC suburbs, escaped to NYC, and currently lives in South Central LA.

While in New York, Cari received her BFA at NYU’s Tisch School of the Arts, then relocated to the west coast, where she earned a living in the hardscrabble world of TV and film production. After receiving her MFA in Screenwriting from AFI, she worked as a staff writer on a new Ali Baba sci-fi romance series currently in pre-production. She also has projects in development with Maor Azran Productions and showrunner Ed Decter (SHADOWHUNTERS, THERE’S SOMETHING ABOUT MARY).

Her work has been lauded by over 25 competitions, including Nicholl, AFF, Page International and Big Swing Productions. Recently, her feature, INTERWOVEN, won the William J. Fadiman Award for Screenwriting, and her pilot BANSHEES, won the Writers’ Room Ready Award for television writing. Cari has also taught for both NYU and AFI, and is thrilled to be joining the team at Native American TV Writers’ Lab.