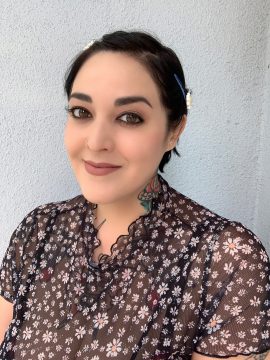 Kaherawaks Thompson was born and raised on Kawehnoke, an island on the St. Lawrence River in the northernmost territory of Akwesasne. An alum of the Sundance Institute Native
programs, Kaherawaks workshopped her short screenplay, Tehokkenhén:tons (“Close to Death”), during the 2010 Native Lab. In August 2012, a short film was produced from the
workshopped story, playing at several festivals across Canada and the USA. In 2014, Kaherawaks was selected for the inaugural imagineNATIVE Festival Script Development lab, with her first feature screenplay. In 2015, her short screenplay, “Lefty’s Hymn”, was chosen among the projects for the first Sundance Institute + IAIA Native Writers Workshop. Kaherawaks continues to write and looks forward to directing and producing films from her original screenplays, and dreams of creating an original television mini-series. Kaherawaks currently resides in Los Angeles.