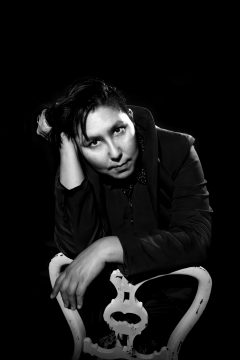 Doane Tulugaq Avery is a filmmaker whose stories focus on feminine, queer, and Indigenous character-driven narratives. She was the recipient of the LA Skins Fest Emerging Filmmaker Award and the imagineNATIVE Jane Glassco Award for Emerging Talent. Her short films have also screened at Outfest, Oaxaca Film Fest, Seattle Queer Film Festival, Māoriland, the Hamilton Workers Arts and Heritage Centre, and the Cinematheque in Winnipeg. She was selected as a fellow for the Sundance Institute + IAIA Native Writers Workshop, the Barcid Foundation’s Native American TV Writers Lab, and the 2nd Annual Native American Writers Room sponsored by the Pop Culture Collaborative. She received an MFA in Film Directing from the California Institute of the Arts. Currently, she is working with Topple Productions as a co-writer on the forthcoming film MOTHERTRUCKER, and as co-writer for an unannounced queer western horror film. She is from the Pacific Northwest, is of Iñupiaq decent, and lives in Los Angeles.