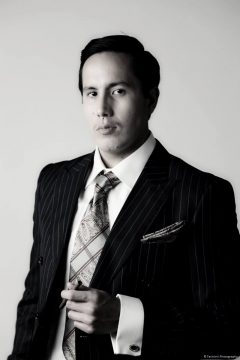 Born and raised on the Crow reservation in Montana, Brian grew up floating the river, hunting, exploring, jumping off cliffs and blasting Korn in his parents basement. After getting cut from the
basketball team two years in a row, Brian took a direction that would ultimately change his life. Running every day for nearly two years, Brian emerged as a running ace, winning a few state championships in track, and setting a state record in the 800m run that stood for nearly a decade. Brian traveled south and competed for the University of New Mexico Lobos. In addition to earning numerous victories and all-conference honors for the Division I powerhouse, Brian also joined the Pi Kappa Alpha fraternity along
the way. Brian began his work in the film industry working as an associate agent in Santa Fe, helping build the Native American division at the A&amp;M Talent House before moving to LA to pursue writing.