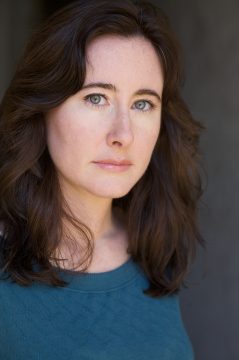 Jeanette Harrison is a director, writer, actor, and producer, who has spent most of her career in theater. For television, she co-wrote with Sharmila Devar a half-hour comedy about family and cultural identity, FEATHERS AND DOTS, DOTS AND FEATHERS. She created and was Head Writer for the webseries The Breakdown (3 seasons); and was a staff writer for the webseries Coach Dan. For SPASigma, she was Head Writer and 2nd Unit Director for their most recent documentary, and a staff writer on Personality Quotient (2018).

In 2004 she co-founded the award-winning AlterTheater in the San Francisco Bay Area. At AlterTheater, she architected the ground-breaking AlterLab playwright residency program. She has shepherded more than 20 new plays to world premiere productions. She directed AlterTheater’s world premiere of AlterLab commission COW PIE BINGO by Larissa FastHorse (Sicangu Lakota), the professional premiere of CIRCULAR by Laura Shamas (Chickasaw), and the multi-Theatre Bay Area award-winning production THE AMEN CORNER by James Baldwin. She also co-directed (with Ann Brebner) AlterLab-developed THE RIVER BRIDE by Marisela Treviño Orta, which went on to Oregon Shakespeare Festival’s 2016 mainstage season, and LANDLESS by Larissa FastHorse, which won the USA Pen Literary Award in Drama.