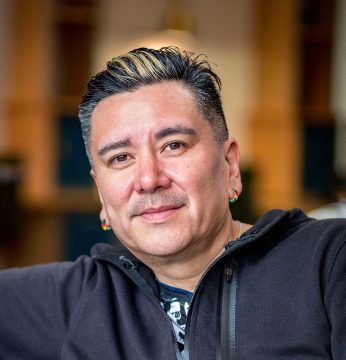 Ben-Alex Dupris is Mnicoujou Lakota, and also an enrolled member of the Colville Confederated Tribes where he grew up. Dupris creates work that pushes the boundaries of modernity and traditionalism in hopes of changing perspectives of Indigenous concepts without censorship. His directorial debut “Sweetheart Dancers” won Grand Jury Award for Best Short Film at Outfest 2019. He recently directed an American Masters “Masters in the Making” for PBS and Firelight Media about the artist Bunky Echo-Hawk that premiered at DOC NYC 2019. He is developing an animation series based on tribal legend stories that reflect the changing nature of Indigenous relationships to the earth in the 21st century.

He is also an incoming instructor for “Indigenous Mythology in pop culture” at Duke University’s Center for Documentary Studies. Ben-Alex is a Concordia Artist-in-Residence at Concordia Studios headed by Davis Guggenheim, and formerly a fellow of Firelight Media labs, Sundance Institute Producer’s lab, and a Redford Center Grantee.