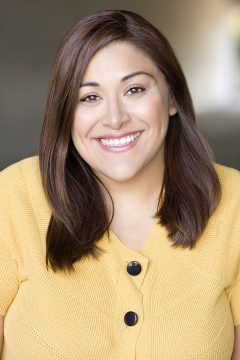 Yelyna De Leon is an award-winning filmmaker/writer/actor from the southside of Chicago where she majored in theater in high school. Since then she has had several of her plays, films and tv pilots produced. She received her MFA in Film and Television production with a concentration in writing from USC, where she co-created and was a showrunner for USC’s first single camera comedy. She also received her  B.A. from UCLA, in Chicano Studies and Film and Television.
……As a published bilingual children’s book author, she has toured the country performing her award-winning book, “Yely’s First Day,”  promoting bilingual literacy.  Yelyna is a NHMC writing fellow graduate and a NALIP, Televisa/Univision Writing Fellow.
—–The teen slasher feature film she wrote and produced, “Murder in the Woods,” starring Jose Julian (A Better Life), Chelsea Rendon (Bright), and Danny Trejo (Machete) wrapped up a very successful festival run, garnering rave reviews. The film which is getting ready to be released, premiered to a sold out audience at the 2017 FICGinLA at the Chinese Theater, won the Best Film Award at the 2017 LA Skins Fest, and screened in Portland, NY, Denver, Brussels, Berlin and at the Chicago Latino Film Festival. More info: www.yelynadeleon.com