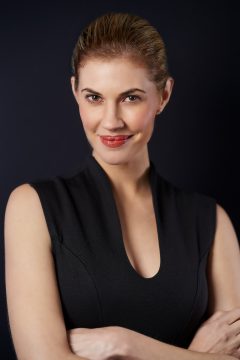 From the farm to the catwalk, Shelley Dennis’ wide-range of experiences have helped her create multifaceted characters with unique points of view. Shelley was born into a family of Choctaw storytellers in small town Oklahoma. She fell in love with theatre and bringing compelling characters to life as early as elementary school – writing and directing her own plays. When her third grade class was “good,” the teacher allowed Shelley to grace the class with her creations. She took a brief time-out when she was scouted by a modeling agency and flown to Milan, where she made a living being tall and hungry. Her modeling days provided her with a plethora of questionable experiences, many of which inspire her projects. Shelley has written for Disney’s Tangled TV Show and toured alongside Wayne Brady, doing both standup and improv. She recently co-created and starred in an 8-episode VR comedy, Sestra!Sestra!, now available on Oculus Rift and Oculus Go!