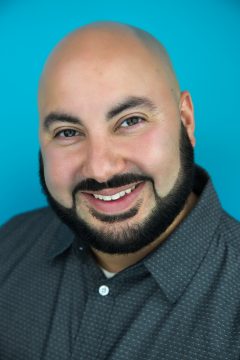 Vladimir Perez is an writer/actor born in Brooklyn NY. After performing in the 2017 CBS Diversity Showcase, Vlad appeared on the CBS sitcoms Superior Donuts and Man With a Plan, the ABC hit show Modern Family, Brooklyn Nine Nine and LA to Vegas on FOX. Vlad is also a proud recipient of the Groundlings NBC/Universal Diversity scholarship 2018. Before appearing in the CBS Diversity showcase in 2017, Vlad was a writer in the 2016 CBS showcase and co-wrote the show closing scene Black Stormtroopers. He has performed sketch and improv around Los Angeles on the iO Mainstage Sketch team Drug Money, The UCB Mess Hall team Fresh Kicks and his Experimental Vaudeville team Perez, Haynes & Sons. Vlad’s sketch “Resting Gangster Face” was selected to be filmed for the 2017 IFC Showcase during the San Francisco Sketchfest. Vlad is a founder/owner of the Sea Tea Comedy Theatre in Hartford, CT and O.B. City Entertainment in Los Angeles. After 25 years he still hasn’t figured out who his favorite Wu-Tang Clan member is.