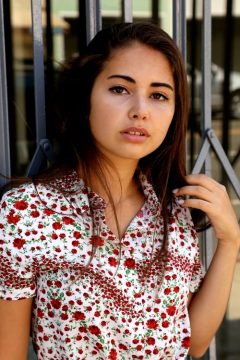 Siena East (Choctaw) is a writer, comedian, and actress based in Los Angeles. Siena studied Film and Television Production at New York University where she was selected to produce her first short film. Her short film “Lycanphobic” was included in both the LA Skins Film Festival, where it was nominated in the Emerging Filmmaker category, and the NYU First Run Festival, where it won an award for Best Supporting Actress.

In 2018, Siena was a part of the 3rd LA Skins Television Writers’ lab, a lab that works with Native American writers. Her original pilot “Mixed Up” was selected for a live reading at the LA Skins 12th Annual Film Festival. In 2019, she was in You’re Welcome: A Pre-Thanksgiving All Native American Improv Show, the first all Native improv show at UCB. Currently, Siena is working as a Writer’s Assistant, and is managed by Thuan Dang at the Gotham Group.

As a comedian, Siena was first featured in the Kibitz Room’s clean showcase, where she won the audience choice award “The Best of the Bunch”. Since then she has performed at the Comedy Union, The Ruby, and has regularly performed at ACME NoHo.