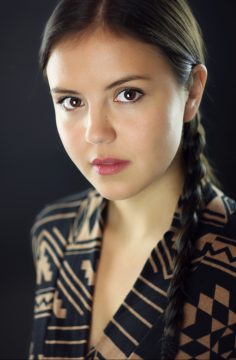 Mary Galloway’s love for storytelling was first honed in 2010 when she attended New Image College’s 2 year, full-time, intensive acting program graduating with a 98% average, where she was also introduced to writing. After graduation, Mary began to write her own stories launching her production company Bright Shadow Productions Inc. (BSP). BSP’s first short film, Ariel Unraveling, was awarded BravoFACT and Creative BC awards totaling $45,000 in which she wrote, produced and starred in the film. In 2015 the Toronto International Film Festival (among many others) welcomed Mary for her lead role of Tara in the award-winning dramatic feature film Fire Song. She has been nominated for a Leo Award – Best Supporting Female for the role of Tara. Last year Mary was very excited to make her directorial debut with her next short film Unintentional Mother. The Kevin Spacey Foundation selected Ms.Galloway as the first Canadian Filmmaker to receive the Artist of Choice Award to make the film. Recently, Mary was appointed a representative from UBCP to join the ACTRA National Diversity Committee. Galloway proudly represents the Aboriginal and female communities and stands as a strong ally to the LGBTQ2+ communities advocating for equality and inclusivity. In June 2016 the Women In Film and TV – Vancouver Spotlight Awards presented Mary with the Newcomer Award and in August the Whistler Film Festival awarded her with the Talent To Watch Award. In early 2017 Mary relocated to Los Angeles to expand her film career, both in-front of and behind the lens. More Information at marygalloway.com