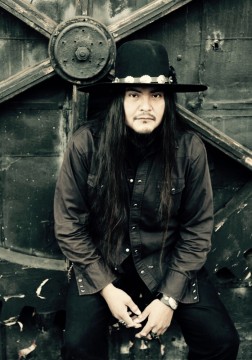 Blackkiss was born back in 2004 when I bought my first guitar with a black pearl finish just like Johnny Cash’s old SE Martin dreadnaught.

The name actually came from a revelation from an old Chilean woman who told me, “You’re like the Sun and Moon at the same time. You are the light and dark, like a Black kiss…” So when I started making music I stuck with “Blackkiss”, a musical style that’s a mixture of a lot of different aspects of music and lifestyles.

Blackkiss is a desert born acoustic music coming straight from the heart of the Navajo-Indian Reservaton. Founder and leader Pete Sandsgrew up listening to the old country songs from the likes of Johnny Cash, Waylon Jennings, Willie Nelson, and at the same time learning the songs of his ancient culture. In 2007, after a year of playing open mic nights, Sands recorded his first Demo “Black Occasion” under the Blackkiss name. Sands took the Blackkiss sounds throughout Utah, Colorado, New Mexico, Arizona, and Texas until landing his first major break at the 2014 Sundance Film Festival. Often compared to Johnny Cash’s American Recording’s Era, Blackkiss took a huge step forward by releasing his first full length debut album “Dirt Dance Floor” in November 2014. Due to their truly unique desert sound Blackkiss has been labeled as gritty and bare-boned Country Music.

We have got some great locals show coming up, most notably my opening for the upcoming The White Buffalo show on Sept 1. We have got some great local  shows scheduled into September and October. At the end of September, I am going to stepping back into the recording studio to record my second album, titled “Dark Side of Country”, with some very astonishing local musicians. And we got some huge plans in the works for November to January, we shall keep you updated on that.