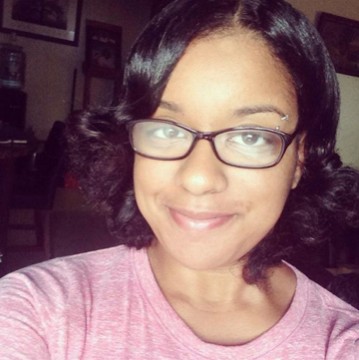 Khadijah Holgate (Nipmuc) was born in Boston, Massachusetts with an undeniable love for all things horror, drama, or thriller. In between attending the yearly and beloved pow-wows with her enormous family of nine aunts, two uncles, and a lump sum of cousins, Khadijah always found time to write creative stories as a child. Little did she know that writing would become such a huge part of her adult life.

Khadijah graduated from Full Sail University with a BFA in Creative Writing for Entertainment in June 2015. While at Full Sail, she maintained a 3.52 GPA and learned how to write for film, animation, comics, and more, but it was television writing that stole her heart.

When she wasn’t off creating what she thinks will be the next hit TV show, Khadijah was an Office Assistant for the online interviewing series “Meet the Insiders.” Some of her duties included social media management, and transcribing interviews of working screenwriters, directors and producers.

She has published a short story in the online Literary Magazine Linguistic Erosion, created short horror content for Seraph Films, placed in BlueCat Screenplay Competition, and self published a collection of poems.

Khadijah currently resides in Los Angeles and continues to write screenplays in hopes of winning contests and gaining representation.