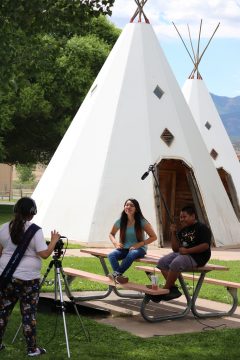 The Barcid Foundation is partnering with the Paramount Network and hosting the Native Youth Media Storytelling Lab —a media program for Native Youth at the Fort Washakie School in the Wind River Reservation! The workshop will be held July 29th to August 3rd.

Native youth will be producing digital video projects that pertain to social issues that affect their tribal community. Various genres, including short documentary, narrative short fiction and public service announcements will be produced in the program.

The storytelling lab is designed to teach acting, writing, directing, camera operation, and video editing. It is intended to teach youth how to produce digital videos that have a logical story line and a professional appearance. The workshop ends with a community screening on the final day at a local venue.

The films produced in the workshop will also be shown at the 13th Annual LA SKINS FEST in November 2019.  The purpose of the screening is to encourage Native youth to pursue their new found talents. In November, as part of the film festival, there will also be a scheduled tour of a television network or movie studio. This tour is designed to offer career opportunities to Native youth in the field of multimedia.

Through this special partnership, Paramount Network will be donating film equipment to the Fort Washakie School. The goal is to establish a multimedia course during the school’s year round curriculum.

The Native Youth Media Storytelling Lab is sponsored by: