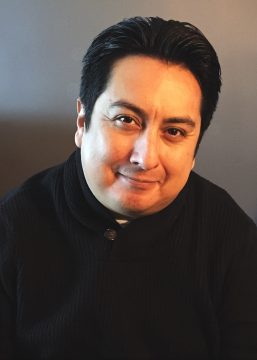 Boise Esquerra is a Native American (Hopi) filmmaker who is currently enrolled in the Colorado River Indian Tribes in Parker, AZ. He is finishing out his last term at the New York Film Academy (Screenwriting), where he is at the top of his class and is in his 9th year of writing. He holds a BA in Digital Filmmaking and Video Production with an MFA in Filmmaking and has always had a great passion for the entire spectrum of his craft and every aspect that goes into it. Being Native American allows him an opportunity to de-stereotype much of the tropes about his culture while bringing these stories to a much more modern, universal and truthful platform. During his time in Los Angeles, he has gone on to write and    direct multiple projects, with his latest, Blackwater a 1⁄2 hr. dramedy about a Native American country singer who is sentenced to 180 days of wellness therapy after ten years of reckless alcoholism, upon returning to her home reservation, going into production this year. The Colorado River Indian Reservation in Arizona is funding the independent 8- episode series. Other notable works include his thesis film entitled, Cowboy which garnered multiple awards from numerous festivals as well as earning an, “Achievement in Directing” award at last year’s LA Skins Festival in Hollywood. Looking towards the future, Boise hopes to continue to write, direct and create in hopes of helping pave the way for diverse inclusion within the filmmaking industry – specifically strong Native American representation.