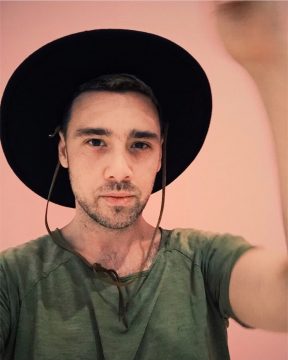 William Paul Smith is an Eastern Shoshone actor, writer and filmmaker. Smith earned a BFA in Screenwriting and Directing from the School of the Visual Arts (SVA) in New York and attended Columbia University’s MFA Film Directing Program. In 2017, he received his MFA in Creative Writing from the California Institute of the Arts (CalArts). In 2008, he became a member of Dangerous Grounds Productions. His roles include Off Broadway productions of Jacques Rivette’s film L’Amour Fou and Rainer Werner Fassbinder’s Beware of a Holy Whore. William’s film script, Headlights On White Roses, was a finalist in the Shore Script competition and won the WeDiversity award. His work examines culture, identity, gender, sexuality, and spiritually through a Native American lens, adopting a filmic language that traverses narrative, documentary, and interdisciplinary cinema. Smith directed the feature-length films Labor of Life and Izhar’s Ghost, a collaboration with MASS MoCA and artist Izhar Patkin. Smith founded WATER, a collective that propels Native American scholarship and activism at CalArts, where he was awarded the 2017 Teaching Fellowship and teaches in the Critical Studies Department.