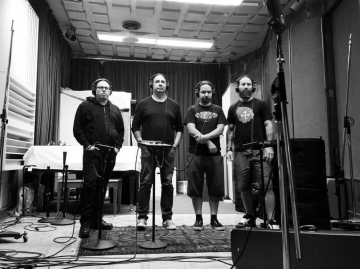 Dory Charles Black Hawk is a member of the Three Affiliated Tribes from the Fort Berthold Indian Reservation.  His tribal affiliations are Mandan and Hidatsa.   He has performed at numerous shows over the years, playing alongside some of music’s most well known and respected artists.  Originally from the DFW Texas music scene, Dory was well known at local music venues like Joe’s Garage, where he opened for Pantera in their early days as a neighborhood garage band.  He has also opened for regional and major acts, and played on stage with Eric Johnson, Joe Perry(Aerosmith), Steve Vai, Joe Satriani, and Phil Collins(Def Leppard), to name a few.

Chris Blagg, a singer from San Francisco, California, is of Kiowa descent but is not enrolled in his principle tribe.  He has enjoyed singing and performing at numerous venues throughout San Francisco and Los Angeles.  Chris’ vocal range is reminiscent of artists such as Jim Morrison whose tone and vibrato lend depth and emotion to their sound.  He is also an ultra runner, regularly logging one hundred miles or more per run.  This conditioning has contributed to his vocal talent by building lung strength and capacity as well as strengthening the muscles of the neck and throat.

Allen Gallegos, a drummer from San Francisco, California, is of mixed descent including Teawa and Ute.  His family has strong cultural ties to their Native roots, but they are not enrolled in a principle tribe.  A long time drummer, Allen is a regular in the local music scene in San Francisco.  He enjoys playing all different genres of music, but his first love is rock and roll.  He is a strong supporter of local musicians and the venues that help them get their music heard.

Leo Gore, a bass player from San Francisco, is a native of El Salvador.  He grew up listening to acoustic guitar and other acoustic instruments, which naturally progressed into playing.  With a strong ear for bass notes, Leo’s playing blends and compliments the overall sound of the band.  He has played with other bands in the local music scene in San Francisco and the surrounding cities.